Crisis Management & Communication throughout the Crisis

Crisis Management & Communication throughout the Crisis

Crises naturally come suddenly and unexpectedly – so good preparation is all the more necessary in order to avert or minimise corporate losses! 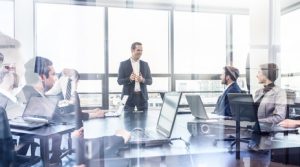 The Triggers of a Crisis in the IR Sector

But what are typical IR triggers for a crisis? Economic crises are primarily triggered by economic disfavor factors and negative events. Global economic crises take first place in a possible crisis ranking (28%). In the following, 17% of the crises are mainly caused by general business triggers. In third place are the categories natural catastrophes, man-made catastrophes and slumps in sales and profits, each with a share of 7%. Other causes such as hostile takeovers (5%), management exits (4%), regulatory aspects (4%), shareholder activism (3%) and rumours (2%) play a subordinate role as crisis triggers.

In general, however, it seems that the factor of company size is related to the fundamental susceptibility of a company to crisis. In a survey conducted by the IR magazine, 40% of the larger companies stated that they had been affected by a crisis in the recent past. On the other hand, this only applied to around 30% of mind-cap companies.[1]

The Meaning of a Contingency Plan

strategies, procedures, guidelines and organisational structures serves to cope with a crisis in the event of an emergency. The aim of a crisis plan is to minimise or even completely avoid possible (economic) damage to the company. As a rule, each company itself is responsible for defining the areas worthy of protection and must therefore always define them individually. Usually, the components of a crisis plan worthy of protection include aspects such as

in question. The orientation of a contingency plan and its objectives determine all further aspects below. These include, for example, the organisational structure of the crisis team, the departments involved or the elaboration of the concrete measures themselves.

First Steps in the Contingency Plan

The starting point for the development of a crisis plan should be primarily the analysis of past negative influences on the company: What crises has the company experienced in the past? What consequences have these had on the share price and the reputation of the company? How did analysts, investors and the press react to the crisis? How long did it take to overcome the crisis? What contributed to overcoming the crisis? How was internal communication organized during the crisis? The bottom line – what worked well and what didn’t work at all?

To prepare for a possible crisis, it makes sense to define several crisis levels within the framework of the crisis plan. These crisis levels then entail different levels of activity in response to the crisis. For example, crisis level 1 is activated in the event of a price loss of more than 5% per day and / or in the event that more than four institutional investors / analysts come into contact with the company per day. This contact can be made, for example, in response to a specific trigger (such as a profit warning). Crisis level 2 comes into effect if the daily price loss is more than 7% and / or if more than six contacts are made by investors / analysts. The criteria mentioned are of course to be tailored individually to the respective company. However, the appointment of a person responsible for activating the crisis levels is indispensable. Usually, this is also the head of the crisis team.

The composition of the crisis team is of particular importance. This inevitably results directly from the objectives of the respective company-specific crisis plan. For example, it is possible to define the avoidance / minimisation of negative comments in the press as a goal in the crisis plan. Then, in the event of a crisis, the respective Public Relations department may be considered as the responsible authority. In addition to the IR department, the legal and finance departments are also conceivable as further responsible departments. IR departments are usually obligated to participate in such a contingency plan.

A clear command structure within the crisis team is needed to avoid confusing and uncoordinated communication processes in the event of a crisis. In addition, a crisis team leader must be appointed and one or more spoke personnel must be appointed. It must also be determined how communication is to take place within the team in the event of an emergency: For example, is it the crisis team leader himself who communicates with the other team members? Or does he contact the respective division head (e.g. the head of the legal department) the other way round, who finally delegates tasks downwards?

Furthermore, the responsibilities and tasks of each department involved in the crisis team (e.g. IR, PR, Finance or the legal department) must be clearly defined and set out in writing. It is conceivable, for example, that all information relating to the crisis could be brought together in the IR team. The IR team then takes on tasks such as preparing publications, maintaining the website and responding to enquiries (from investors, analysts and brokers). In addition, corresponding approval processes for press releases, social media releases (e.g. via Twitter) and the sending of e-mails etc. must also be defined. The PR team may be responsible for media coverage. For example, it formulates answers for the press and organises appropriate press conferences.

A crisis communication plan shows concrete measures to be taken in the event of an emergency, including the respective personnel responsibility. The measures are each directed at a specific addressee. Companies often already expect crises, for example as a result of the publication of negative company results. Preparations for the crisis day can then be made to the extent that appropriate workshops are held with investors and analysts at an early stage. In the course of this, complex facts can be presented and uncovered.

In addition, it can also be useful to develop different communication contents for this purpose. While the investor is usually almost exclusively interested in the influence the crisis will have on the share price, the analyst focuses differently on his specific interests: namely on the consequences of the corporate crisis on the concrete business and thus on his capital market models themselves (e.g. discounted cash flow model). The press, on the other hand, is often interested in finding out what the consequences of the crisis will be for the company’s employees.

It can make sense to simulate the crisis plan once a year within the company in order to ensure a smooth process and to uncover weaknesses.